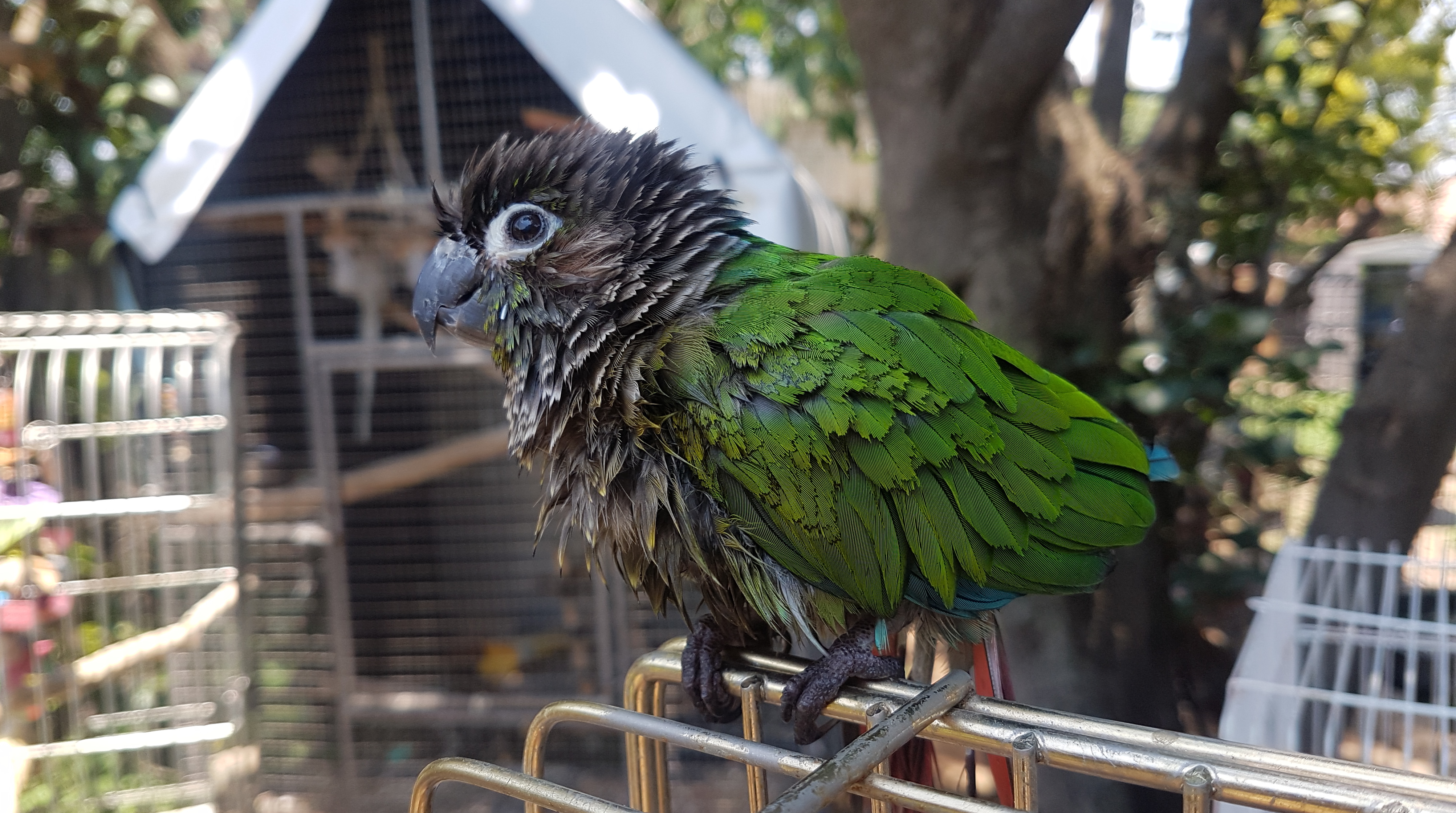 When I speak at a seminar and talk about giving a parrot a bath or shower, a lot of people exclaim that their parrots hate their baths/showers. When I hear this from an Amazon caregiver I know that people are missing some important information because most Amazons love their showers. In fact, when a parrot of another species loves its shower, it is often said that the bird is like an Amazon parrot. There is also a commonly held belief that African Greys don’t like to bathe. I can’t remember a single parrot that I have worked with that didn’t like getting a bath or a shower if it is done or introduced in the “right way.” Bathing or showering is a very important part of a parrot’s life. Many parrots come from areas of the world with high humidity and even in the drier areas of Australia have a monsoon season. Parrots depend on bathing for feather care and respiratory health. Bathing encourages preening which is the way that parrots keep their feathers in good condition.

I often joke that people put the squirt bottle “on stun” and then try to shoot the bird off of the perch and wonder why their parrots don’t like showers. I think that just about every parrot can learn to love showers if it is presented to them in a gradual manner. Many parrots get used to things gradually instead of all at once. Too many people see that their parrots don’t like shower the first time so they give up way too soon. Parrots need bathing opportunities but they need to be presented with nurturing fun.

When my late great grey Bongo Marie came to live with me back in the mid-1970s, she was afraid of everything. She was very a very sick wild-caught parrot so I had to medicate her and that didn’t help her learn to trust me. After we finished the medicine, I couldn’t even make eye contact with her or she would throw herself off of her perch and do that classic wild African grey growl as if I was going to kill her. I learned to lower my head and not look at her when I walked by her cage. Gradually I could look at her as long as I lowered my head after the eye contact. Everything was presented to her gradually and during the next six weeks or so she gradually began to trust me.

She was quite dirty when she came to me and I had tried to towel some of that off of her when I medicated her. I couldn’t imagine her accepting a shower. Once she would step on my hand and sit on my chair arm and watch TV with me, I started working on teaching her to enjoy being showered. I noticed right away that she seemed very alarmed by the squirt bottle I had and wondered if it was the red nozzle. The next day I went shopping and found a squirt bottle with a blue nozzle and she seemed OK with that. When she was sitting with me, I squirted myself in the face with a fine mist spray and laughed. I did that several times over a few days and then I sprayed to the side of her so only the finest mist hit her. The first few times she shook her whole body but she didn’t seem afraid.

Each time she sat with me I would spritz her a little bit more but never with the squirt bottle pointed directly at her. Each time I would be a bit silly and tell her I was going to get her and laugh. After a week or so more she relaxed and was no longer threatened by the presence of the previously dreaded squirt bottle. I would always spray to her side giving her an invitation to move into the spray if she wanted to and eventually she did want to.

I really don’t remember how long it took before she welcomed the shower when she was on her T-stand and then actually asked for a shower by saying “gonna getchew” and laughing. Within a year or so, it turned into a great game that Bongo Marie would initiate. When she was on the top of her cage or the T-stand, I would approach her with the squirt bottle behind my back, I would say, “I’m gonna getchew.” She would then lean forward from her cage and I would bring the bottle out and direct the spray right at her and she would say, “Ohh, ohh, ya got me.” If she wanted to play the game with me, she would be the one to say, “I’m gonna getchew!” and I would get the water bottle to play. We played this game for close to 25 years until she died.

Wild African greys spend a lot of time feeding on calcium-rich grasses in shallow puddles. Caiques, like my buddy Spikey LeBec, rub their bodies through the wet leaves in the tree canopies in the Amazon jungle. When I was in Costa Rica, I watched what seemed to be a small family group of yellow-naped Amazons stomp around in the spray of a small waterfall. Bare-eyed cockatoos have been observed bathing and playfully rolling around in shallow water near rivers and lakes. Many years ago, it was obvious to me that many parrots would really enjoy bathing in a shallow pan with sopping wet greens in it so I bought a ceramic paella pan and put about an inch of water in it with some collard greens or kale in it. This became Bongo Marie’s favorite way of bathing. Of course, she was not quite sure what to do the first time I put the flat pan with the wet greens in it on the kitchen counter for her. My two double yellow-headed Amazons, caique, and slender-billed conure also love this fun time bathing experience, while my Bare-eyed cockatoo is not too sure about it. She only has one leg so I usually place her on a towel and shower her with the mist from the squirt bottle. I also occasionally place my parrots one at a time in the shower and mist them that way with the water never hitting them directly. Spike likes this method too but in the twenty years he has lived with me, he has never become comfortable with a squirt bottle.

Parrots are so “monkey see, monkey do” that it should be called “parrot see, parrot do.” The best way to teach a trusting parrot to explore something is to let them see you do it first. Of course, I was not going to take a bath in a bathtub filled with greens for the benefit of my parrots, but just letting Bongo Marie see me splashing my hands in the greens and splashing my face with water did the trick. Once she stepped into the pan, she had a lot of fun getting herself completely drenched. While some of my parrots love to bathe in their water dish, especially when I vacuum, they all love it when I set them up with the opportunity to splash around in the wet greens. I think that parrots tend to bathe in their water bowls when we vacuum because it sounds a lot like rushing water to them.

My friend Shari Beaudoin of Parrot Island in the Minneapolis area found a great toy at a kid’s store. It is a molded plastic toy water park with moving water that is about 2 feet by 2 feet. All of her parrots from the Hyacinth to the caique love to play in it but her Vasa parrot, Gadget, loves it the best. Sometimes she puts greens in the sink with a little bit of water and her caique, Scooter has a great time with supervised play in the sink.

Some people are lucky enough to live where they can to keep their parrots in an outdoor cage part of the day. This is a perfect time for them to bathe in a flat pan on the floor of the cage or aviary. A friend of mine has a large aviary and her parrots love to go out there on summer days. She bought a waterfall fountain for the outdoor aviary and her parrots absolutely love the running and splashing water. The combination of bathing ad drying in the sunshine really makes the feathers on a healthy bird shine.

Don’t worry about bathing your parrot in the winter if your house is heated. In fact, because heating can dry out the air and both our skin and that of our parrots making it more important to provide them with humidity. They may actually need more showers or baths in the winter. After a bath, you may notice your parrot shivering and you may think that means he or she is cold. Actually, they can control the shimmying of their feathers as a way to drip dry quicker. In the wild, that is very important because being very wet can decrease their ability to escape a predator attack.

As with many parrots, my African grey, Whodee, loves to play in the water. He loves the flat pan with greens and he loves being sprayed so much you would think he was part Amazon. When I lived in California, his cage was right next to an area that divided the living room and the living room. There was a shelf there and I put a fountain with a square of slate that was hinged at the top. Water ran down the slate and into rocks at the bottom so it added humidity to the area. At that time, I discovered that Whodee was a Houdini escape artist. One day he stretched himself over to the fountain and climbed to the top where he got the piece of slate swinging. As he swung it with great enthusiasm, the water either went into his cage or behind the TV set. My elderly mother screamed, “SALLY, You need to put Whodee back in his cage!” By the time I got there from my office, Whodee was already back in his waterlogged cage looking very innocent with a sort of “Who me?” look. 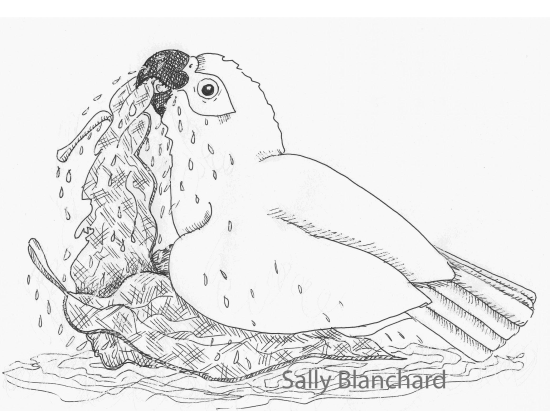