Eclectus Parrots and their diets 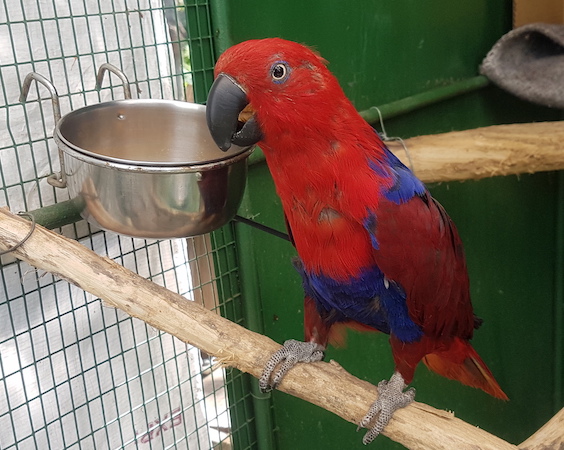 In my personal experience, as well as the experience of many clients and non-clients regarding their eclectus parrots with mis-colored feathers or demonstrating muscle spasms, the following is my opinion.
Coloured pellets. To my knowledge there have not been any research projects on the use of dyes in coloured pellets for parrots. The dyes in coloured pellets have at least two serious consequences in eclectus parrots; they may cause extreme irritation and they may prohibit the development of normal feather colouring.
In terms of irritation, from the reports of individual parrot owners, it seems coloured pellets cause such severe irritation that the bird even chews on its flesh. Just one veterinary report. Some years ago a parrot breeder whom I personally know was recommended coloured pellets for her birds by the local pet store. She gave coloured pellets to her pet African grey, a perfectly healthy bird who loved the pellets and consumed a great deal of colored pellets on a daily basis. After a few weeks the owner noted that this grey was losing feathers in the crop area and a few days later the bird was discovered chewing on the skin of the crop! She took the bird to an avian veterinarian who was a professor at a local university who tested the bird and reviewed its history and determined that the dyes in the colored pellets were the problem. The bird owner discontinued those pellets and the bird eventually recovered. This is just one example. There are other cases which are similar.
In terms of causing mis-colored feathers in eclectus parrots, individuals have contacted me reporting their eclectus was molting and the new feathers coming in were yellow (instead of red in females and green in males). Yellow is the base color of eclectus parrot feathers. A yellow feather means the bird did not produce the appropriate color for that feather. This means that either the appropriate nutrient was not available to the bird or that the bird was not able to use the available nutrient. These parrot owners were feeding colored pellets. In these cases, it seems the dyes prevented the development of the appropriate color. When colored pellets were removed from the diet of these birds, they were subsequently able to produce normally colored feathers. It should be noted that pellets without dyes do not appear to cause irritation or mis-colored feathers. (There are also other reasons for the development of yellow feathers, such as damaged feather follicles.)
Muscle Spasms: Toe Tapping and Wing Flipping.
Back in the early nineties my avian veterinarian asked about toe tapping in eclectus. I promised him I would bring him an example. I took the recommended daily amount of powdered vitamins for parrots and sprinkled that on the soft foods of one eclectus each day for one week. At the end of the week the bird was toe tapping. I took that bird to my vet and sat it on a perch so he could see the muscle spasms in the toes, which were extending out from the perch and then returning to their normal position, gripping the perch. This muscle action was not the decision of the bird, but an involuntary muscle action. This involuntary muscle action can also affect the wings, where the wings are quickly extended and then returned to their normal position.
These muscle spasms, toe tapping and wing flipping, are said to be caused by the bird’s inability to uptake calcium from the blood into the muscles, often as a result of consuming a significant amount of man made vitamin A, (which is not a naturally occurring vitamin). There are many commercial products made for parrots that contain man made vitamin A, from commercially produced pellets to commercially produced parrot treats. An avian nutrition researcher in Australia, Dr. Debra McDonald, has written about the effects on parrots that have consumed a significant amount of man made vitamin A in commercially produced bird food. She stated that birds cannot easily utilize this man made vitamin. They store it in the liver. When there is an excess of man made vitamin A, it can cause problems with the metabolism of calcium and may inhibit the transfer of calcium from the blood to the muscles. This lack of calcium in the muscles results in muscle spasms. (Reference: Pet & Aviary Birds, Issue 15, January/February, 2003, pp. 40-43)
(Note: There can be other causes of muscle spasms in eclectus parrots, but diet seems to be the most common cause.)
Laurella Desborough January 2020