Charlie was admitted to hosital on Monday after his foster mom noticed he hadn’t eaten all day, and he was struggling to breathe.

He was admitted to 24hr emergency hospital in Fourways where they put him on oygen, and then he was transferred to the Bryanston Avian, Exotic and Small Animal Clinic.  He is still under their care right now, on oxygen.

The Fourways Vet Bill is R1646 and the Bryanston one so far is R1231. We are reaching out and asking for any assistance, if you can to help us pay these bills.  Whether it’s R50 or R500 – your help will help not just Charlie but all our other birds as well – as these unexpected vet bills are always over and above our monthly budgetd expenses.

Charlie started his new life with Brainy Birds as Bubo in 2017. He was a breeder bird that was abandoned. When he arrived, he had hardly any feathers on his back, chest or under his wings. Severely underweight and depressed, he wasn’t responding to efforts to feed him porridge or any other food. Eventually one of our volunteers Tracy agreed to foster him in August 2019. She had him for two days when he suddenly spoke and said “Charlie, you’re such a good boy.” Tracy immediately renamed him. He even started calling Tracy Michelle – possibly his previous owner.

Soon after he started eating his chop and pellets and was totally off porridge. However, initially we thought he was a young bird, but with his recent visit to the vet, they suggest he’s well into his 30s. So the previous years of poor diet and stress have taken a toll on his little body.

Charlie loves bananas, and the occasional treat of a small piece of cheese. And for some reason drinking out of a bottle rather than a bowl is great fun for him. Tracy has done a spectacular job in rehabilitating Charlie and bringing his spirit back out to the fore. Now we keep our fingers crossed, and send love to them. 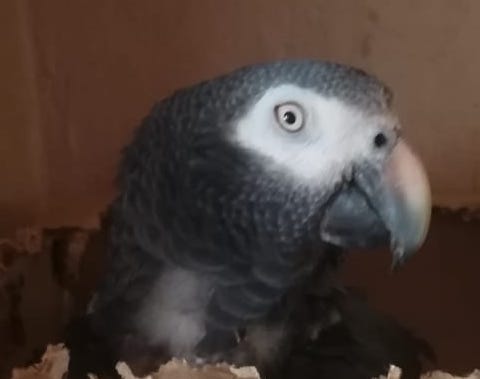 Our international supporters can donate via paypal here

Save a bird just by shopping. Dismiss